Tacking Point lighthouse was built in 1879 when lighthouses were the responsibility of each colony. Before roads and railways, oceans and rivers carried freight and passengers from local towns and villages to major cities. Sea travel was quite perilous and there was much excitement here in October 1874 when the Ballina arrived carrying a reported unusually large number of passengers, most of them members of the Marine Board:

Tacking Point lighthouse is one of several lighthouses built on the Mid North Coast to aid maritime navigation. Designed by Colonial architect James Barnet and constructed of bricks on a local stone foundation, the lighthouse shone its first light on 4 April 1879. Tacking Point was quite remote when the lighthouse was built. Manned by a keeper and his family they were responsible for making sure the light was lit and remained so. Their residence was adjacent to the lighthouse although only the foundations remain today.

A newspaper report in 1899 described Tacking Point lighthouse as an ‘object of interest, very prettily situated’ and commented on its perfect order and cleanliness due to the efforts of the lighthouse keeper Mr T Robinson and his wife. The Robinson’s were obliging in showing visitors over the building, a practice that continued until World War I when visitors were banned under the War Precautions Act. The ban was lifted at the end of the war. 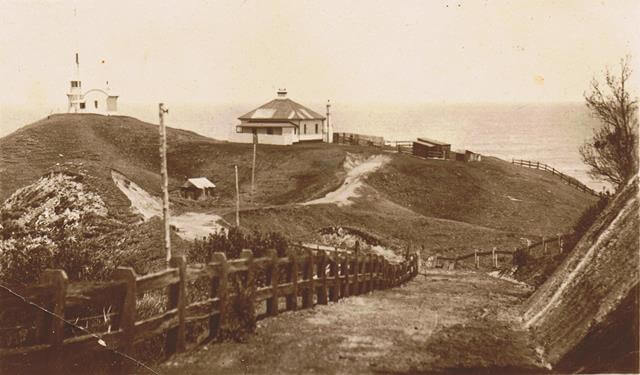