For many years, the birthday of Queen Victoria, 24 May, was also marked by a special day in Australia, Empire Day, but not until after her death. Empire Day was held across NSW for the first time in 1905. The day was intended to recognize Queen Victoria’s long reign and to encourage school students in particular to feel proud of their country and understand that they were part of the British Empire. The day was also established in response to concerns that Federation would weaken the ties of subsequent generations of Australians to Britain.

Locally, the first Empire Day brought together children from Port Macquarie, Hamilton and Blackman’s Point schools for a picnic and sports day. The children marched through Port Macquarie to the Agricultural grounds where they were seated in the grandstand and addressed by dignitaries including member of parliament Mr. R Davidson, M.L.A. and local clergy. The addresses were about certain aspects of Empire Day and were interspersed with patriotic songs such as the National Anthem (God Save the King), Rule Britannia and When the Empire Calls. Races, sports and displays followed in the afternoon with the adults of the town coming along to view the children’s performances. The day concluded with a procession of lighted torches lead by two horses proceeding through the streets to Gaol Hill where a bonfire and display of fireworks was held. Apparently the horses were not pleased with all the fires that spectators had lit along the way.

By 1907 the children’s display program had been expanded to include free exercises, dumb bells, floral march, flag drill, maypoles, running maze, club and wand drills. The adults also got into the spirit of things with an ‘Old Buffer’s Race’. A concert held that evening in the School of Arts, featured ‘the best local talent’ and ‘addresses of a highly intellectual character’ were delivered.
During the 1920s Empire Day celebrations were school based with patriotic addresses and prizes awarded for academic work. In 1928 the Rev. R. Grayson concluded his address with the words “Don’t eke out an existence in a selfish and ignoble life, but realise more and more every day the joys of citizenship and the value of a heritage”.

Similar events were held in subsequent years and local school children continued to be addressed on the importance and significance of Empire Day. In 1949 pupils at Port Macquarie Central School celebrated Empire Day with a simple open air ceremony chaired by senior pupil, Ray Robinson. The day included a recitation by George Vogele of his poem, ‘Captain Cook Visits Australia’. Empire Day was phased out during the 1950s. 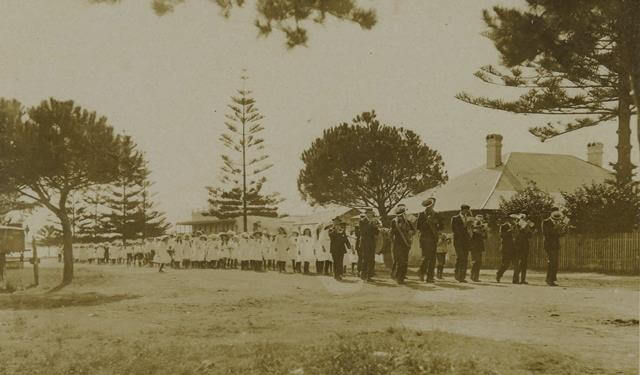